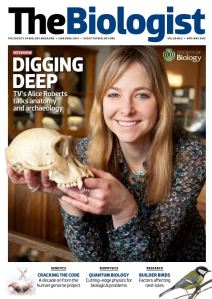 Alice Roberts read medicine before specialising in studying disease from human bone specimens – known as paleopathology or osteoarchaeology. After appearing in Channel 4’s archaeology series Time Team in 2001, she is now a regular face on television and has presented programmes on subjects ranging from wild swimming to early human migrations. An author of books on anatomy and evolution, Roberts lives in Bristol, where she grew up, and is expecting her second child in April.